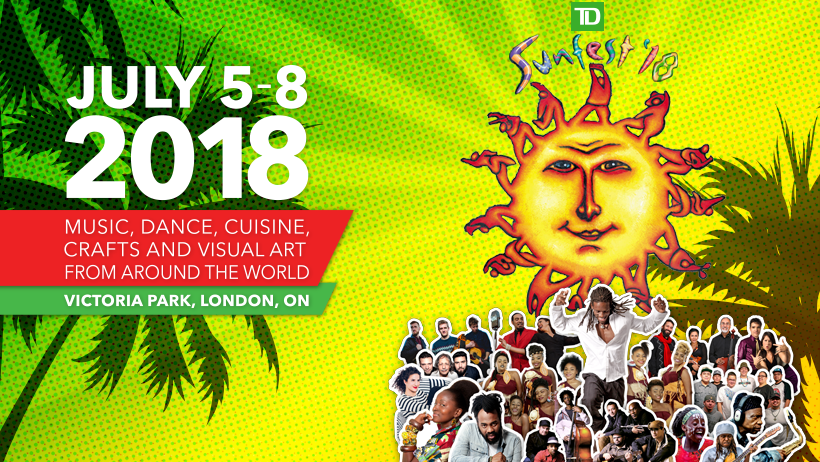 What do you think of when you see or hear the word Sunfest? Does it conjure up images of laying on a beach at a nice Caribbean resort? How about thoughts of a warm sunny day sitting on the deck at the cottage overlooking a lake with some nice music playing in the background? Or perhaps a movie from the 60’s of a stereotypical group of long haired types worshiping the sun, jamming with their guitars and bongos while enjoying friends, fellowship, food under the warmth of the sun.

Everyone would have a different thought or image from the word Sunfest. Whatever the painted picture your mind creates when it hears, ‘Sunfest,’ it is likely not far off from the actual event of one of the most successful and popular summer happenings in the heart of Downtown London.

If you did choose one of the three scenarios listed above you would be very close as to some of the activities that take place over four days encompassing the very first weekend of July at Victoria Park every year. 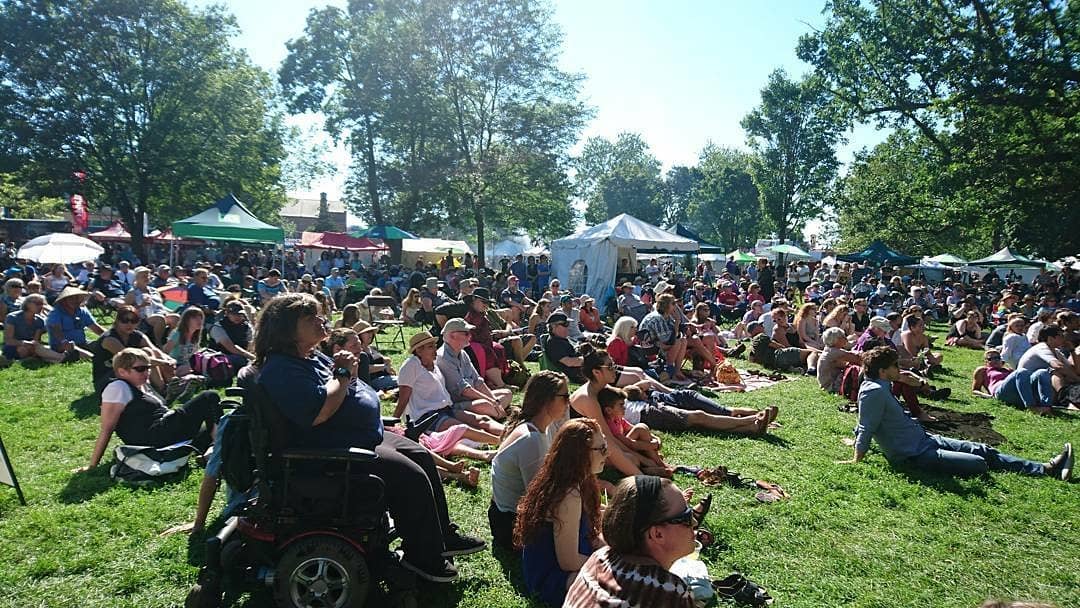 If you truly think of it, the name Sunfest is quite fitting. Why? Because it is a cross cultural event. If you trying to weave a common thread through every race or culture there is nothing more recognized in the world than that of the sun.

We all see the sun at some point during the day or parts of the year. We all use the sun for the growing of food. Everyone enjoys the heat of the sun. Many plan events surrounding the sun being visible, after all no one wants to have a gathering of people in the rain. The sun is there to provide light, heat and joy. What one thing can you think of that gives us more joy then being out in the sun? Quite simply, nothing. 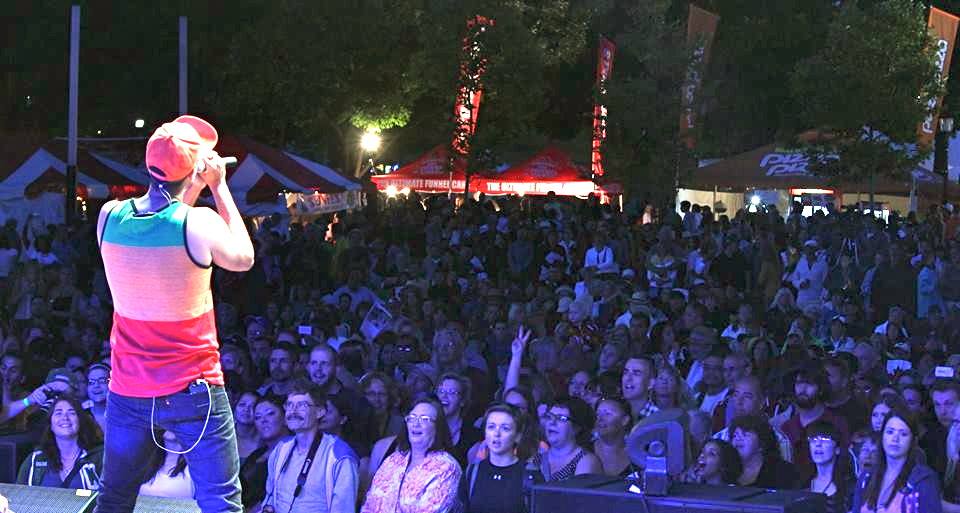 Sunfest in London, Ontario will be celebrating 24 years at the 2018 event of hosting the annual festival of food, culture, art and music.

This is one of the must go to, outdoor festivals in Downtown London. It’s free admission to everyone, which includes the baby in the stroller to the canine variety on a leash. The event attracts over 300,000 visitors during its four-day run from Thursday to Sunday and is open from 11AM to 11PM.

Why go you say? There is not event of this magnitude within the City of London at your doorstep that offers international cuisine, music of all types and flavours, handmade crafts that will absolutely knock your socks off, plus a place to bring the tots, toddlers and tweens and teens to expose them to other cultures, music, food and carnival rides and atmosphere. This is a family friendly event that has something for everyone. Here are some facts to validate the reasons to attend the Sunfest!

Music is performed daily by a myriad of cultures on 5 stages throughout the day. Live performances from over 36 musical groups (4 of which are affiliated with London) from around the world. If you love any style of music you can find it here. It’s a common occurrence to be overtaken by the upbeat, cross cultural, National, International, Reggae and Caribbean styles of music performed by musicians with an infectious stage presence to make you get off your chair or stop walking to get your groove on. What a better place to dance your unique style where not many onlookers don’t know who you are or will never see you again. However you might embarrass your family.

There are many festivals that recycle their musical talent. Not Sunfest as they like to find new performers each year with the exception of Five Alarm Funk who have played at the festival for over 8 years. The goal is to curate a list of accomplished international performers to discover and who would like to come perform and entertain at the Sunfest.

Sunfest doesn’t depend on mainstream performers to draw the crowds and contribute to the success of their events. The goal is to have the success of Sunfest come from the experience itself. 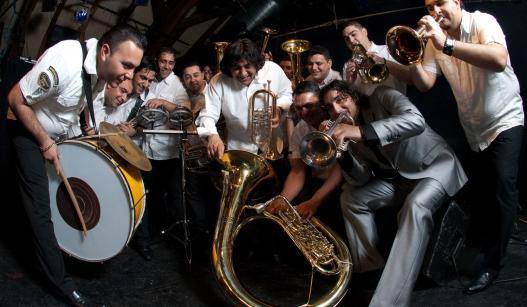 There is no better time to dance to a different beat then to tango your tongue and taste buds with delectable food from around the world. The international food at the festival is fast becoming one of the major draws of the Sunfest. With International Cuisine from menus around the world, gives you the opportunity to please your palate from delicacies from around the world without ever leaving Downtown London. You can treat your tummy to food from South Korea to Canada, then over to a Caribbean island and back over to Italy all within walking distance. 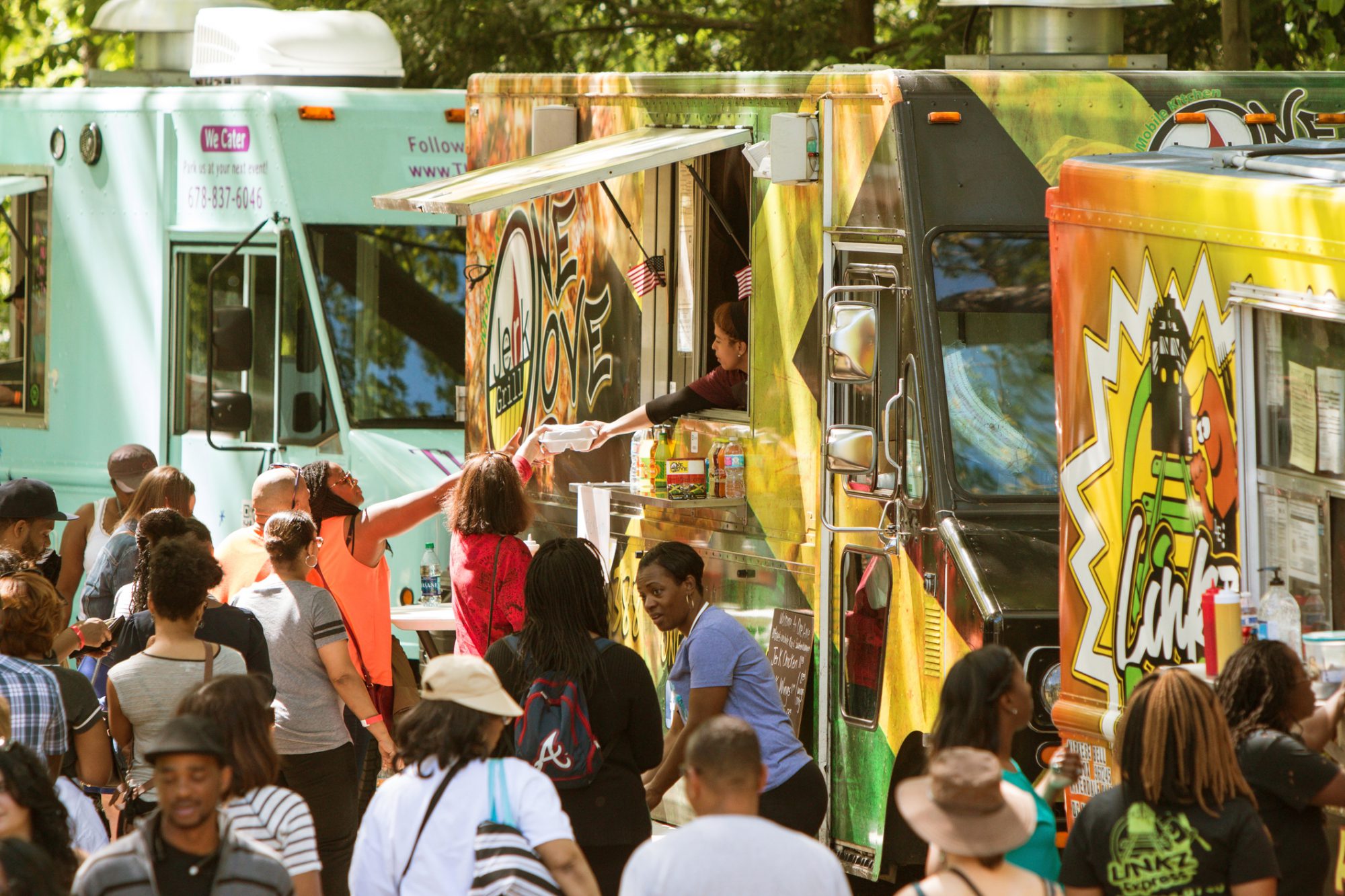 Sunfest is for all ages. There are carnival rides and bouncy type places for children of all ages to laugh and put a smile on their face while the adults can watch in enjoyment while munching on a Taco with the sounds of a Reggae band in the background.

It’s also perfect to bring Fido along. What a nicer place to be on a sunny afternoon going for a stroll with one of the most sensitive of noses on a leash beside you. Your dog will enjoy the walk while their nose is sidewalk surfing looking for droppings from a passing enchilada. 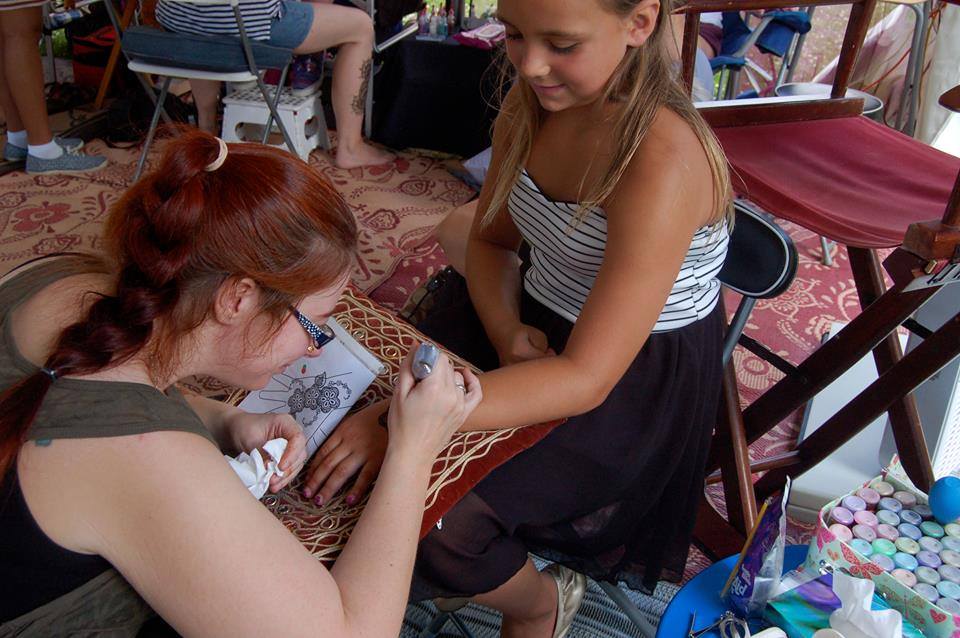 No better time to begin Christmas shopping and certainly not a better place. Handmade crafts from beads, clothing, musical instruments and so much more from over 300 artists. Think of how your love ones will remember because you thought of them as you travelled around the world to bring home a gift from another country. 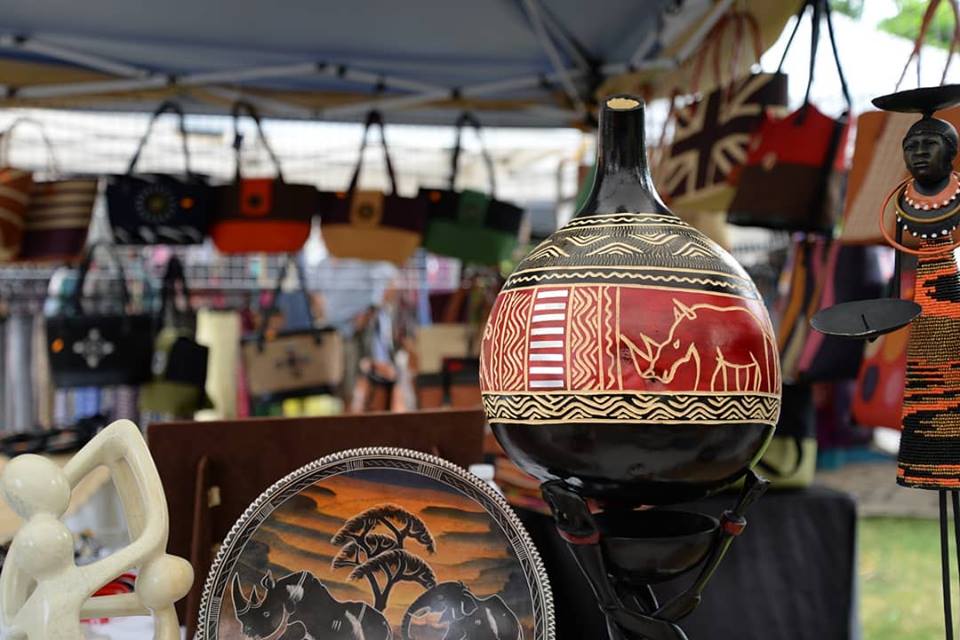 There are so many people in the City of London who want to be part of this event. Every year there are over 400 volunteers who help from setting up and tearing down the displays and making the entire four-day event run smoothly. Sunfest also employs 6 part time students to assist in organizing the event. 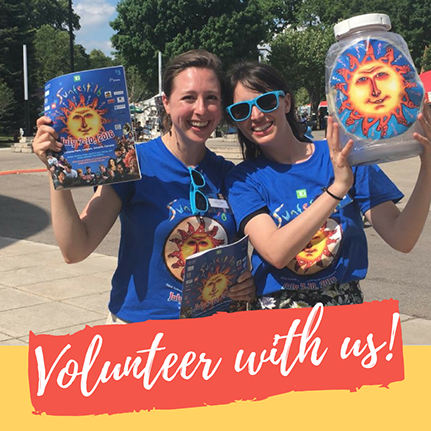 Now that we know what to expect, how did all this begin. Alfredo Caxaj, who is the founder and event organizer, came to Canada from Guatemala in 1985 and initially settled in Toronto. What he saw in the GTA was a city which was thriving in diversity and art. This was Alfredo’s initial thought of what all communities were like in Canada until moving to London. He saw the city as being diverse but nothing was happening to bring people together and celebrate the blending of the community. Being a performer himself, he fostered a vision and created what he thought London was missing.

When he arrived in Canada, one of the first things Alfredo did was start up a Salsa band and played in his community. It was very hard to come to a new country, so music became his therapy. It helped him face the daily challenges, discrimination and social pressures. This was also how he entertained his family by taking them to see live music rather than taking them to theme parks.

Now 24 years later the event called Sunfest has mushroomed from very humble beginnings to one of the top ten international and multicultural festivals in Canada.

Alfredo refers to the Sunfest as a global village as the music, food, festivities, crafts and carnival type atmosphere appeals to everyone. More than 25% of the attendance come from outside Southwestern Ontario and there are those that travel from the other side of the world just to attend this event.

Off the Cuff Tidbits

One less known fact is that Sunfest runs some musical events throughout the year at different venues such as the Aeolian Hall.

His global village has a huge following of sponsors and advertisers over the past few years. TD is now the official corporate sponsor of the event with Alfredo being the integral key to Sunfest every year.

In 2012 Alfredo was honoured by being on the list of 2013’s 10 most influential Hispanic Canadians. This is the first time a Guatemalan has ever received this distinction.

Sunfest is already bursting at the seams of Victoria Park with plans in the works for 2019 to block off the streets surrounding the park in Downtown London to make the event larger for vendors, musicians and patrons.

Attending Sunfest is like going on a trip around the world through music, arts and crafts and of course international food.

Come soak up the sun, sounds, food friendly smells at the Sunfest, and bring people together. Oh, and Admission is Free!!! 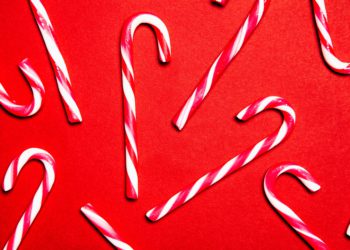 Ways To Support Local This Christmas 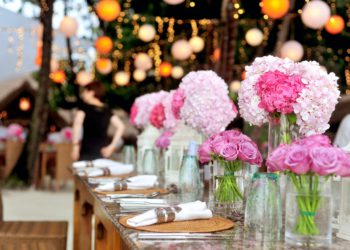 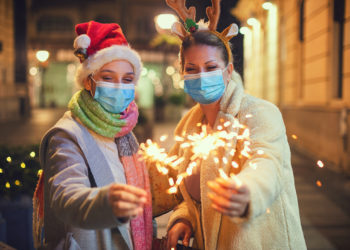 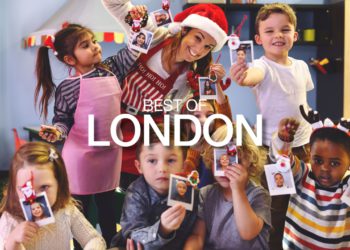 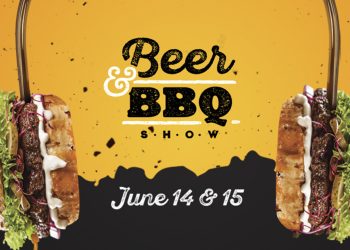 Five Reasons To Visit The Beer and BBQ Show This Year 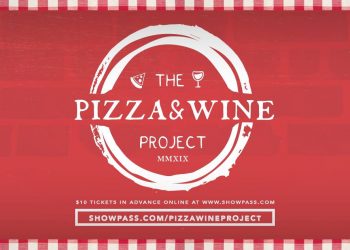 The Pizza And Wine Project